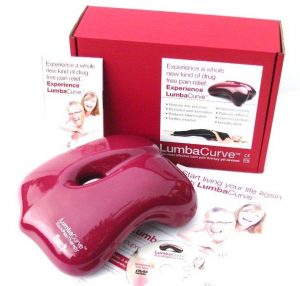 The initial idea of LumbaCurve was conceived around 2000 by company founder David Pegg during a dinner with an ex-school friend whilst discussing his friend’s back pain and how to overcome it. Eventually, a rough sketch of a concept was drawn on a napkin with the basic aim of stretching the back in order to get some sort of relief, rather like an early morning stretch.

Unfortunately, the first design attempt failed miserably and almost spanned the friend’s entire back, achieving nothing. Knowing that this oversize device would not be practical, it was back to the drawing board, and the consideration of how manual therapies worked such as physiotherapy, acupressure and shiatsu, from which evolved new design concept.

Drawing on engineering principles, a clear idea of the specifications needed for LumbaCurve was formulated. The new design would be much smaller, and would incorporate several therapy aspects important in the treatment of low back pain

In this model (and all other subsequent models after that) the initial shape acts as a fulcrum, allowing the back to stretch just as a physiotherapist would do. The channel that runs through the LumbaCurve is created to allow the sacrum and vertebrae to float freely to avoid pressure and discomfort whilst stretching. The sides of the channels incorporate slight ridging to enable the user to replicate a thumbing action employed in chiropractic to mobilise the facet joints, ease disc pressure on nerves thereby relieving associated back pain.

In addition, the surface shape away from the sacrum area was contoured in such a way to incorporate pressure to those areas in the back associated with pressure points focussed on in Shiatsu or acupressure therapy for back pain relief

In order to determine the most effective shape, drawing on his engineering background, David created the very first LumbaCurve prototype at home using polystyrene and later on, layers of chipboard. During this period willing guinea pig back pain sufferers were sought to test out each version. Over the next few years, the garage (workshop) became full of test models created by trial and error until the optimum design that would prove to be most beneficial for relieving back pain was achieved. 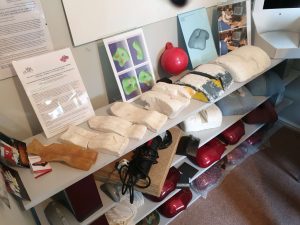 The next stage was to attempt to physically measure the dimensions of this purely handmade organically shaped creation in order to produce a tool to manufacture the finished article. Because of the complexity of the shape this had to be done by laser scanning to record the x y z coordinates of LumbaCurve. Because the handmade version was slightly asymmetrical it was necessary to take the digital image, select the “good” side, “mirror it” and then digitally stitch these two sides together! Laser scanning was relatively easy but the complexity of digitally reassembling the two halves proved to be beyond the technical capabilities (at the time) of three UK Universities. In the end, the task was finally achieved by the Stodt Laboratories (Holland), who to this day have the original handmade LumbaCurve as a demonstration piece for their equipment

The initial LumbaCurve production version was made from rigid polyurethane foam as a reaction injection mould (RIM) and was ideal in terms of its surface hardness, necessary for the therapy. The downside was the weight (at nearly 4kg) with LumbaCurve having the same characteristics as a ten pin bowling ball!  In addition, production cost became too expensive and the subsequent retail price of LumbaCurve (£149!) was far higher than David wanted, even though the therapy was proving very effective with users.

In 2012, a more cost effective lighter version was produced in rotationally moulded polyethylene but although just as effective as the previous version, the surface quality was inferior and easy to scratch in use.

Production was subsequently changed to a blow moulded polypropylene, which has seen LumbaCurve weigh in at less than 1kg with increased durability, an impressive surface finish and durability, but most importantly for customers, a very much reduced cost price.

This design has grown from strength to strength. David believed in this back pain relief device so much so that he invested in a clinical trial to differentiate LumbaCurve from other back pain devices. Results proved what David already knew.

The findings presented to the Society for Back Pain Research in Dublin concluded that LumbaCurve was indeed significantly more effective than the NHS treatment guidelines against which it had been tested.

Since then LumbaCurve has been nominated for two innovation awards, has won a UKTI design award and was voted Holistic Therapy Product of The Year 2016/7.

After years in the making, LumbaCurve is proving itself to be a highly effective product for back pain relief and mobility. It is used by many healthcare professionals including chiropractors, physiotherapists, and sports injury physicians as well as many other happy customers.