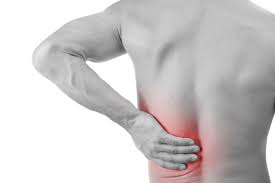 It’s estimated that low back pain is the most common cause of job related disability or workplace absenteeism in the US. , although, fortunately, most occurrences of lower back pain will go away within a few days. Others take much longer to resolve or lead to more serious conditions.

Acute or short-term lower back pain generally lasts from a few days to a few weeks. Most acute back pain is mechanical in nature — the result of trauma to the lower back or a disorder such as arthritis. Lower back pain from trauma may be caused by a sports injury, work around the house or in the garden, or a sudden jolt such as a car accident or other stress on spinal bones and tissues.

Symptoms may range from muscle ache to shooting or stabbing pain, limited flexibility and/or range of motion, or an inability to stand straight. Occasionally, pain felt in one part of the body may “radiate” from a disorder or injury elsewhere in the body. Some acute pain syndromes can become more serious if left untreated.
Chronic back pain is measured by duration — pain that persists for more than 3 months is considered chronic. It is often progressive and the cause can be difficult to determine. (1)

Incidence of back pain

According to the most recent (2006)back pain data published on the American Academy of Orthopaedic Surgeons website, there were some 13 million reported physician visits resulting from back pain. Women affected by back pain made up 7.1 million, whereas male back pain sufferers numbered 6.2 million.

Lost Productive Time Due to Common Pain Conditions in the US Workforce
It was estimated that nearly 13% of the US workforce experienced a loss in productive time during a two-week period due to a common pain condition :

Cost of back pain therapy

In 2005 Americans spent $85.9 billion looking for relief from back and neck pain through surgery, doctor’s visits, X-rays, MRI scans and medications, up from $52.1 billion in 1997, according to a study in the Feb. 13 issue of the Journal of the American Medical Association (JAMA). That money hasn’t helped reduce the number of sufferers; in 2005, 15 percent of U.S. adults reported back problems—up from 12 percent in 1997.

Not only are more people seeking treatment for back pain, but the price of treatment per person is also up. In the JAMA study, researchers at the University of Washington and Oregon Health & Science University compared national data from 3,179 adult patients who reported spine problems in 1997 to 3,187 who reported them in 2005—and found that inflation-adjusted annual medical costs increased from $4,695 per person to $6,096.

Spinal patient costs were also significantly higher than for non spinal patients. “People with back pain problems cost 76 percent more on average than people without back problems each year,” says study co-author Brook Martin, a research scientist at the University of Washington. (4)